What kind of foods do the Brazilian residents of the periphery [or] outskirts of urban areas consume?

In 2014, the Ministry of Health published the Food Guide for the Brazilian Population, which has as a golden rule: always prefer fresh and minimally processed foods to ultra-processed products. It may seem like a simple task, but for most of the population, it is not. A study conducted in Jundiai, a city in the country side of São Paulo, showed that this may be one of the biggest obstacles to healthy diets.

For some people, much more than the information about what they are eating, what lacks is the easy access to fresh and minimally processed foods, i.e. products that are fresh or have undergone a few changes after being removed from nature. A study that was carried out in Jundiai, a city in the country side of São Paulo, reveals that this is the reality of the outskirts of the urban area, where the population is especially vulnerable to health problems such as obesity, hypertension and diabetes. There are some reasons for this. One of them is the difficulty that the population from that region has to find places that sell healthy foods for fair prices. Another reason is how easy it is to find places that sell industrialized foods – the so-called processed or ultra-processed foods – such as fast food chains and convenience stores with attractive prices for the consumers.

Between December 2017 and April 2018, the researchers analyzed 650 places that sell food in the city of Jundiai. The locations were classified into 13 categories according to the types of products that are available for sale: fresh or minimally processed foods, processed culinary ingredients, processed and ultra-processed foods. Data that was also raised was if the establishments had gondolas with ultra-processed foods at the cashiers, the availability of vegetables at the entrance and what type of food was predominant in the places. This information was crossed with geographic and socioeconomic data from the population of each region of the city.

Research has revealed that places that sell mainly raw and fresh foods and put fruits and vegetables right in the doorway have greater abundance of healthy foods. But the quantity of these stores is small, compared to places that prioritize ultra-processed products or that make this type of food near the cashiers available. The number of places that prioritize the sale of these products is 5.6 times bigger than the number of those that sell, primarily, fresh foods. This number goes up to 22 times more locations that sell mostly ultra-processed products when analyzing medium and low-income regions. In these areas, it is even possible to observe places where there are no stores that sell healthy, fresh foods, but only products of other kinds. 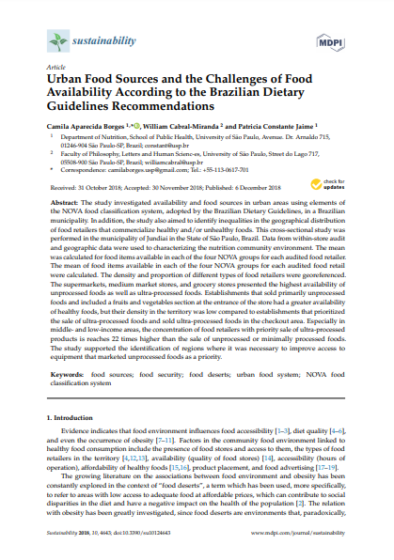 Do you have any questions, suggestions, comments or want to help increase the debate about adequate and healthy eatings? Send an e-mail to contato@alimentandopoliticas.org.br or fill out the form on the Contact us page.